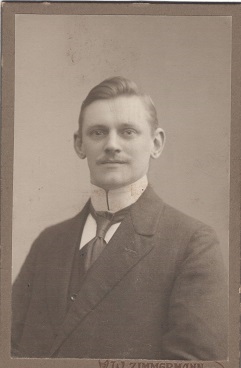 F.J. Palmboom Jr (Frits) was born in 1879 and died in 1947. He was a descendant of an Amsterdam family and self-taught as a musician. He was mostly known for his children’s songs, which were regularly performed on Dutch radio before W.W.II, by the children’s choir of Jacob Hamel. Not being a professional musician, he worked in the tobacco trade and at the "Twentsche Bank". In his free time, he played the organ within the Dutch religious movement "Vrije Gemeente" in Amsterdam. This religious movement was actually gathering in the building that would become the famous concert hall Paradiso.

In 1923, the cantata ‘Woudidylle’ ('Forest idyll') for children’s choir was perfomed at Theater Bellevue. Palmboom also wrote spiritual songs, a Nocturne for flute quartet, character pieces for violin and piano (published at Edition a Piacere as 'Six Pieces', EaP SR0354), a concert for flute and organ and several soloworks for organ, among which a collection of 50 Interludiums.

During his life, a collection of twelve children’s songs was published by the firm Alsbach & Co. Another publishing house in Amsterdam, Seijffardt’s Muziekhandel, published several of his organ pieces. None of these publications are available anymore.

A selection of the abovementioned Interludiums are now also published at Edition a Piacere. The Interludiums are subtle character pieces, often in ABA-form, where the reprise of the first part often features small rhythmic variations on the first part, counter-melodies are added or colour changes are caused by different harmonies. The pieces are written in the idiom of late Romantic period with some mild chromatics, sudden harmonic modulations and interesting suspending notes.

The original manuscript indicates that the pieces are meant for organ or harmonium, but they are well suited for piano as well. The pieces were intended to be played at the end of the sermon of a preacher or minister. In a citation from the composer himself it is read that “a large number of these Interludiums are among the best work I have written….”